Italy lost yesterday at the Euro to Germany in PKs.. I was not able to watch the game. Well, it wasn’t so much that I was not able to but chose instead not to due to my unbelievable sense of obligation. I was committed to being at our scheduled league games and although I was a skip and hop away from my house I opted not to leave when the Italy match started. I did record the match but nowadays it’s almost impossible not to hear or know the result. In any case I couldn’t help myself but look anyway.
Italy fared well in this tournament. Described as the worse team put together for Italy in a long time not many thought they would do well. A lot of people were questioning Conte’s player selection. During a televised show where the whole team was there including Conte, the hostess point blank asked Conte if he thought he selected the best possible players. What a stupid and inappropriate question. Considering the players he selected were present as well. How do you expect him to answer this question? In any case, I think Italy answered that question on the pitch. It’s unfortunate to lose the way they did but that’s how the ball rolls sometimes. Believe it or not I called that Italy would beat Spain as much as I got mocked for it and I also predicted that the Germany game would go to shoot-outs… only I had Italy winning it. Oh well. As I wrote earlier I do have the game recorded but I am not sure if I will watch it. Atleast not immediately.. I am still reeling from it and all the tweets on this subject.

I want to say that at this point I really don’t care who wins it but that would be a lie. It would bother the shit out of me if Portugal wins it. A team that has played uninspired soccer so far.. was not able to win one game in the group stage and yet because of their easy bracket find themselves in the semis no less. Pure garbage.

I feel so gutted for this man… 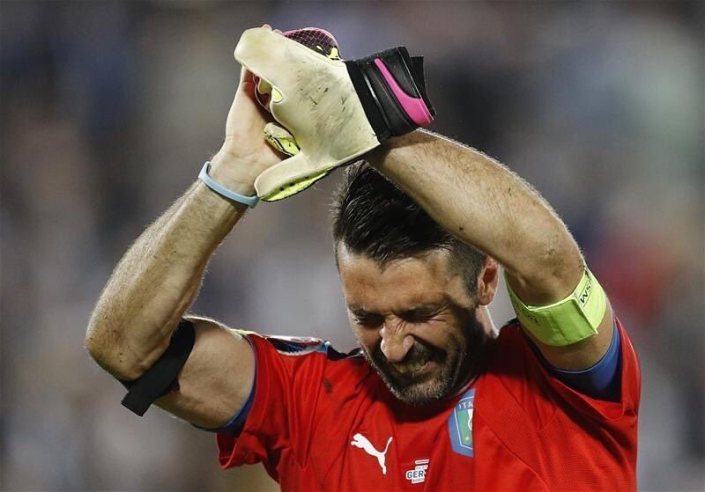 It will be so weird not seeing him suit up for the national team.

This entry was posted in This and That and tagged beautiful game, euro, Euro 2016, germany, Itlay, soccer.