The Misadventures of my @BBMobile #KEYone Case, Amazon and IntelCom Express

A few weeks ago I watched iJustine unbox a oneplus and in that special edition box were 5 cases. Five! One was carbon fibre and it was gorgeous. I already have a case for my KEYone but decided to see if a carbon fiber one exists. Not a skin, I have tried that. A case. I didn’t find any but found one I thought I would like and so I ordered it last Sunday. I am a prime member so expected delivery on Tuesday. On Tuesday the package was delivered to my wife’s workplace (my choice) and at noon it was in my possession. When I opened the package however it wasn’t what I ordered. I look at the labelling on the actual package which was covered by intelcom’s other labelling and it was addressed to someone else. So I got the wrong package. I called intercom express, told my story and was placed on hold for ten minutes, was then told she couldn’t reach the driver and that someone would call me back. By 3pm the person who received my package called my wife to bring her up to speed that intelcom was being difficult about this whole mix-up. By 5pm I called intelcom again, got the same woman, was put on hold for a good 10mins, was told again that driver could not be contacted and that someone would call me back by latest noon on Wednesday. Surprise! That call never happened. I then decided to get amazon involved and chatted with someone and the whole experience got me NOWHERE !! Ok so sometimes online chatting Is not the way to go. On Thursday after more failed attempts with intelcom we find out from the person who had my package that u can actually call the carrier and request you be transferred to Amazon and they will do it for you. He was able to get a refund and a new package delivered. That’s what I did. I landed that same woman and when I told her I wanted to talk to an amazon representative to file a complaint and get a refund she quickly asked if I would give them a chance to fix this first. I told her no. I told her I recognized her voice and I had no interest being put on hold and going through the ritual from the other day. So I got connected to an amazon Rep and within 15mins I got a refund, I got to reorder my case, I got to choose 1 day delivery and she waived the 7$ charge and I was guaranteed delivery by Friday. I was also given a free month on my prime membership. On Friday at around 1pm since there was no indication at all that the package was on its way a call was made to intelcom express who said they didn’t receive any package yet. A call to amazon confirmed that and I was then told that unfortunately chances were I would not get the package Friday. Given that, I told the representative that the delivery address needed to be changed to my home address since the address they have is a business one and no one would be at the office on Saturday. She changed the delivery address for me. Within 15mins of our conversation I got a notification from intelcom that my package would be delivered with the next 3hrs. Say what? How is that possible? I assumed the one I re-ordered. Nope. Wrong. It was the original one which they went to get from the person who got it in error. One hour or so later I got another notification that my other package would be delivered within the next 3hrs. So by Friday evening I went from having zero cases for my KEYone to two. Oh and BTW I did get a refund … so one case was a freebie! 😀👍… so was this case in the end worth it?

For now I will say yes. It’s fairly light weight which is important to me.. Rubberized and the back is a clear plastic which allows me to showcase the BlackBerry logo. On the negative side, it’s clear plastic and so FINGERPRINTS!!!! UGH. What was I thinking! 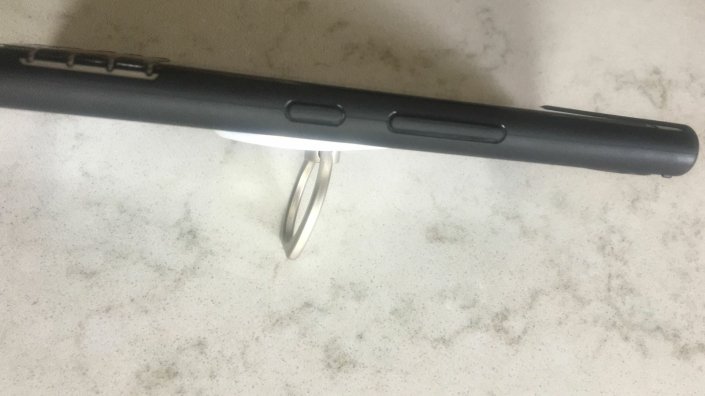 I wish the buttons weren’t covered. I think after some use i will cut out the rubber off the buttons. Should make things easier. Although it’s not too bad right now.

BTW intelcom express does not have a good reputation … do some googling and it will confirm this. There is actually a petition out there that wants amazon to stop using them as a courrier.

This entry was posted in This and That and tagged all things BlackBerry, amazon, blackberry, blackdroid, KEYᵒⁿᵉ.