After A Full Week with my BlackBerry #Passport : The Regret

You see what I did there? My post headline implies my regret over getting the BlackBerry Passport. That’s what you call click bait. Getting someone to click on a link and then the post turns out to be something else altogether. Nowadays anyone can be a ‘journalist’… writing junk… and when it comes to BlackBerry there is so much of this garbage out there but have no fear that’s not the case here. I do in fact have a regret… that I didn’t buy this beast of a machine sooner!
I am a BlackBerry enthusiast and have always had phones with a physical keyboard. From the Bold 9900 to the Q10 to the Classic… I also prefer a small form factor. Or so I thought.
I have been on the Passport for a little over a week now and using it as my daily and only driver… here are my thoughts so far.

The size: being a small form factor guy I was a little concerned. When I first laid eyes on the passport I thought it was such a great idea and so different but couldn’t see myself getting one. I thought it would be too big. I was wrong.
The quality: it’s a BlackBerry. That should be enough. It feels fantastic in the hand and solid as can be. I have never dropped a cell phone in my life (believe it or not) but I know that if this phone would fall I wouldn’t have to worry. It will never happen though. Not on my watch! 🙂
The performance: there is a reason I refer to this phone as a beast. It’s fast. Dang it’s fast. Love my Classic but no contest.
The Battery: what the hell is a charger?

The Display: nice and big. Can’t possibly complain about that…of course I have to be careful what I am viewing 😉

The Keyboard: what can I write about the BlackBerry keyboard that hasn’t already been written. It’s a BlackBerry… again enough said…but i will write this…QUALITY!!! I adore typing on this quality keyboard. The fact it’s touch sensitive. Innovative Genius.

The one speed that is lacking right now is me… I must admit that even after a full week the three row keyboard has affected my typing. I am a ninja on the classic. I do have moments when I am flying but there are times when I studder. As I usually have Blend on at work the plan for next week is to stay off blend and just type, type, type on the Passport. However as I tweeted a few days ago the force is strong with this one so I know that soon I will become the ultimate Jedi working this beast.

Working the phone with one hand is not too bad… but then again it’s really not meant for one handed use anyway.

So has my Passport garnered some attention ? It has.
I had a friend comment ‘what the f@@k’ is that when she first saw it… it might have been ‘what the hell is that’ but no matter. Lol
I love showing what the keyboard can do.

I will be putting this beast to work this season as I am involved with our local semi pro soccer team as assistant coach and social media guy. Should be a blast.

As is the case with all my previous phones I have ordered a screen protector and I opted to get a skin versus a case. I tried a skin on my classic and found it not only to be cool but it allows the sexiness of the BlackBerry phone to exude and not be hidden by a case. 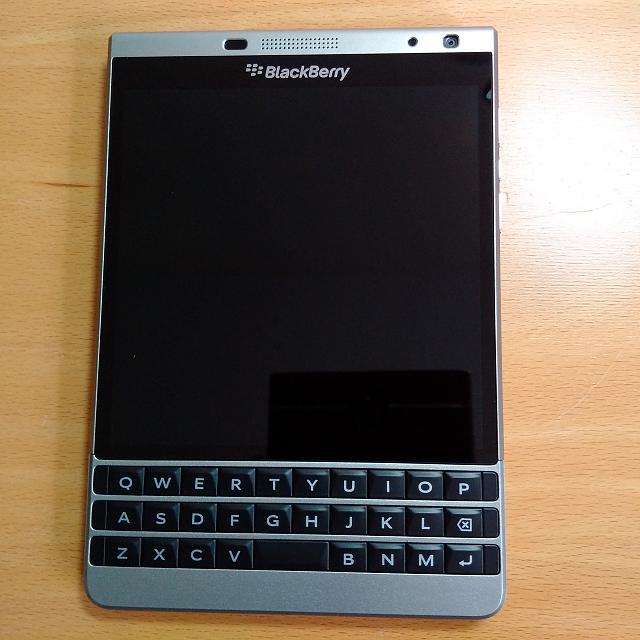 This entry was posted in This and That and tagged blackberry, click bait, passport, Silver edition.