Amazing How BlackBerry Continues to Polarize

*UPDATED* boy I feel silly… the Dave in my screen grab isn’t Dave from UTB after all because UTB Dave is Dave Mathews.

I don’t really follow other story lines like I do BlackBerry. It’s amazing what this company is able to create in terms of reaction and emotion. We basically have the die hard,loyal,purists that can always find the positive in any news that comes out regarding BlackBerry. You have of course the trolls that just live on bad news.. and finally you have those that support BlackBerry but worry and don’t know who to believe. Right now I am in that last group.
It’s been an interesting week for BlackBerry to say the least. We had some project manager quoted as saying that the future for BlackBerry is Android… and bam… the storm it caused was unreal. Hand it to BlackBerry to quickly put out a post on ‘Inside BlackBerry ‘ to once again reiterate their commitment to BlackBerry 10. Here’s though what I thought could have been done differently. They reiterated their commitment in a post that was dedicated to the release of the Priv in India.. so the article was 99% about the Priv with a few words about their commitment to BlackBerry 10. The better option should have been to separate the two even if it meant that the article about BlackBerry 10 was a repeat of what they wrote a few months back. The other concern I have is that at no time has BlackBerry mentioned that their commitment to BlackBerry 10 will go beyond 2016. I tried to voice this on a channel and I got this from a Dave…. which I assume is Dave from UTBBlogs.. 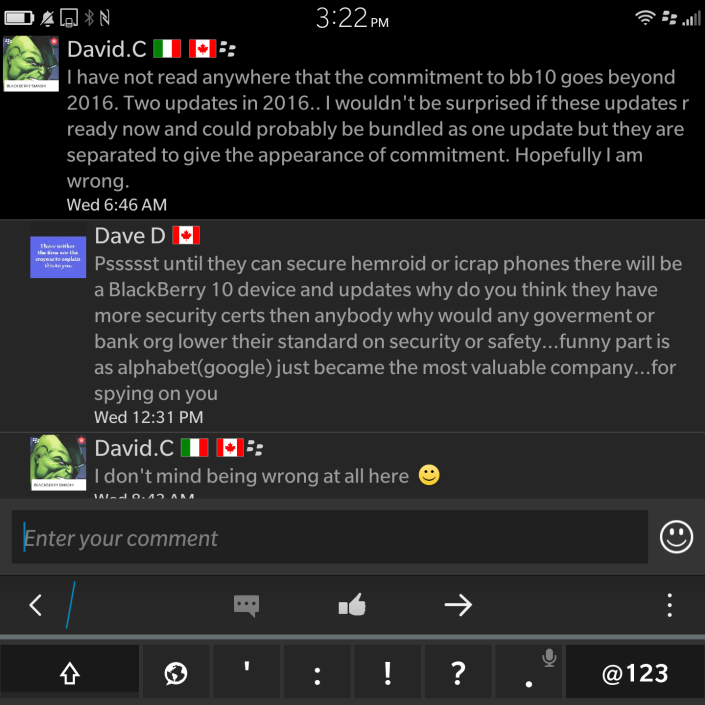 Now don’t get me wrong.. I admire the positive spin these guys put on everything BlackBerry. I listen to their blogcast religiously every Saturday morning. However, I personally could have done without the ‘pssst’.. what are u ‘Pssst’ing me about? I don’t know that I wrote anything that is far fetched and incorrect. Of course I absolutely want to be wrong. Let’s face it if come 2017 BlackBerry pulls the plug on BlackBerry 10 noone can accuse them of lying because they have not shown any roadmap for BlackBerry 10 beyond 2016. Chen can easily fall back on the fact that their commitment was only for 2016. Anyway only time will tell.
Yesterday news came out about layoffs and that Gary Mr BBM himself was leaving BlackBerry as well. One need not imagine what stir that caused. And every time news like yesterday happens u have guys like @JT_Teran putting out his ‘if people can’t realize that BlackBerry 10 is dead I don’t know what else to say’ tweet. Tweet it enough times and I guess JT at some point you will be right… and then you can tell everyone I told you so. Oh brother.
I recently saw a tweet that predicted BlackBerry 10 disappearing in about three years which is the time he thinks will take to get Android enterprise ready. We’ll see… the fact is that we can twist and turn information the way we want to.. spin it.. deny.. whatever… in the end only Mr Chen knows what he has planned. *le sigh*

This entry was posted in This and That and tagged android, blackberry, blackberry 10.