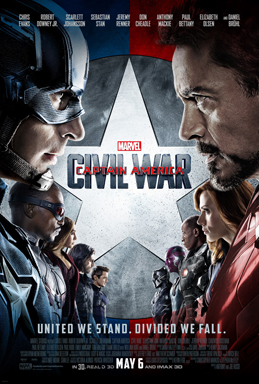 I typically go watch super hero movies the weekend they are released. With the Internet it’s impossible to avoid spoilers. I also can’t understand these ‘tv spots’ that now seem to be a trend with movies.. I think if I had put together all the tv spots for Captain America I could have watched the movie for free. I, of course, refused to view these tv spots. So what did I think of Civil War? In a word, ‘underwhelming’. I was very excited to see Black Panther and Spiderman.. most reviewers agreed that black panther stole the show and that spiderman was entertaining. Ok, sure. Black Panther always intrigued me growing up reading comics and he didn’t disappoint. There was a mystery about him yet in the movie he unmasked himself in a heartbeat. Alrighty then. Spiderman was good comedy relief, I think, but nothing really spectacular ;). The build up leading up to the movie was all about ‘which side are you on’, #teamcaptainamerica or #teamironman and after the movie I felt like I didn’t want to be on either. I am team Hulk anyway 🙂 ! The teasers also led you to believe that a team member would die and that didn’t happen. Shame, shame, shame for the mislead! But then again that’s par for the course. Cross Bones bit the farm. Too bad. Can’t really understand why he had to especially so soon in the movie. What was the point of even having him in the movie? One saving grace to the movie? Scarlet Witch… sexy as hell. Thank god for that atleast.

Here you have it. My ‘Joe Dirt’ review…