I’d like to think I am a pretty positive guy. I’d be lying if I wrote that I always am but I try to be. We’re now halfway through October and still no sign of 10.3.3. In a recent interview Thurber was quoted as saying not to read anything into the delay. 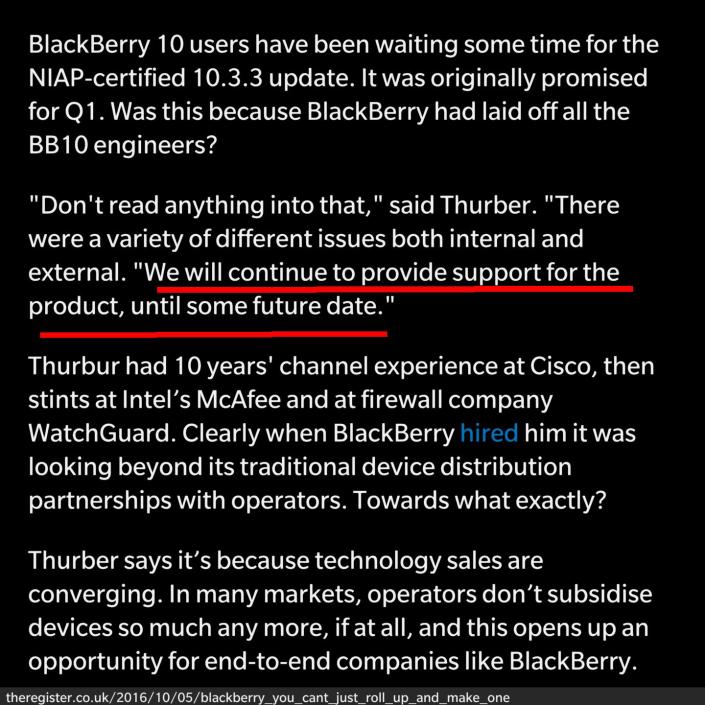 What caught my eye initially was the part I have underlined. If we are not supposed to read anything into the delay what are we supposed to think about his comment? ‘.. support the product until some future date?’ that kinda sorta implies that BlackBerry 10 will/could go away at some future date. When will that be then? Will that be in 2017 when they get their android phone NIAP certified ? Will it be in 2 years, maybe 5, 10? Who knows. I emailed someone I well refer to a ‘E’ about his comment. Essentially she came back with the same thoughts.

‘I wish I could say I know exactly how to interpret it. Honestly, I read it as “It’s our plan to continue, but that plan may change.” So, they’re committed to bringing us OS support for 10 as long as it is feasible for them to do so.’

It’s hard to predict the future but i’ve said It in the past… it’s easy for BlackBerry to say BB10 isn’t going anywhere because that’s their truth now but in the future when it does go away they will have their reason and noone can accuse them of lying.

The other thing that caught my eye was Thurber’s comment that there have been external and internal reasons for the delay of 10.3.3. I understand the ‘external’ part. You can’t control how quickly another entity gets things done but what about the ‘internal’ reasons? What’s that about? This OS release is supposed to only be about NIAP certification. What internal issue could exist? Unless of course there will be more included in the OS after all! That quite frankly would be awesome. I mean it’s the least they could do for us patient BB10 users.

Anyway – I do want to believe that the future for BlackBerry 10 is so bright that I will have to wear shades but I don’t see it. This wonderful OS never caught on. Never got the support it deserves. From the carriers to the devs and consumers too.

Even a dev like Nemory has slowed down his development quite a bit… his apps are good but need updating and the only thing you get out of him when u inquire on anything is ‘maybe’ and a lot of ‘bro’. To this day his #Inst10 app doesn’t allow for video uploading or regramming. Recently he tweeted out that he’s been working on a year long project app that clearly will not be for BB10. Interestingly enough after that announcement he put out an update to a couple BB10 apps; bug fixes. I don’t buy that anything was fixed. I am a software developer. I could add a line of nothing in code and say I fixed a bug. The dev for @iGrann. Same story. I think his last 3 updates have been to fix performance issues. I haven’t seen any improvements. Just the other day @Blaq one of the best twitter apps around put out a small minor update. I was so shocked by the update. This dev jumped ship over a year ago. Actually the last tweet on Blaq was a year ago yesterday.
This is the reality that is BB10.

I will end this with my usual… I hope I am wrong. I want to be wrong.

This entry was posted in This and That and tagged bb10, blackberry, bright, future.

I was supposed to write about this last week but then got distracted with other things. I had this clear path I was going to take with this post but then I listened to the usual weekly BlackBerry related podcast and got enlightened. They touched on the subject of BB10 licensing and the potential and now I don’t know that my path is clear anymore.
Anyway, here goes nothing. I was excited for a split second over the thought of BB10 being licensed. Then after that full split second I started to think about who the target audience would be? It can’t possibly be the consumer. Sadly BB10 didn’t catch on like it should have so how would licensing it out be any different ? However, through different articles and this podcast I came to understand that I have to look past the handset and that BB10 may and can be reincarnated in other areas. One such area is IOT. Well let’s hope this path BlackBerry has taken is clearer than this post’s path!! I still feel that we are getting mixed signals though… 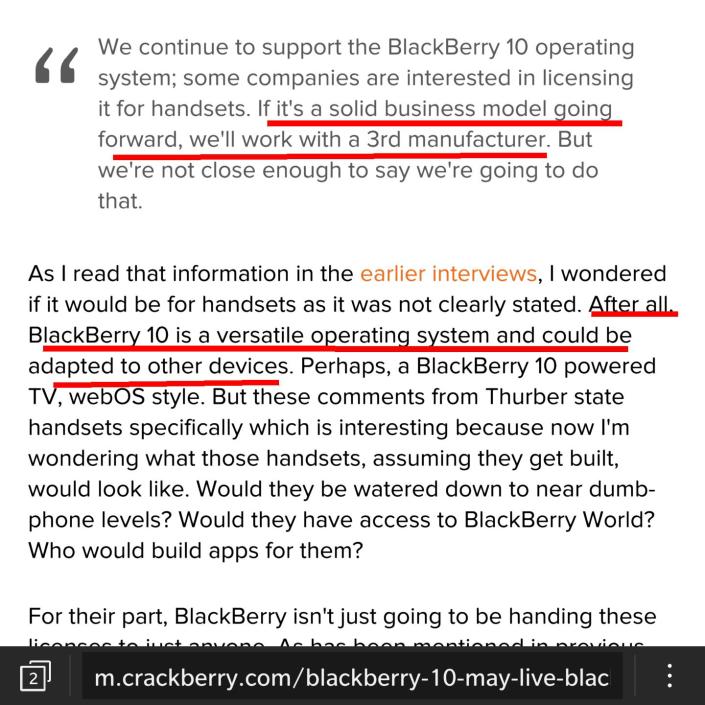 So? Support for BB10 will continue until some future date? Doesn’t that imply that at one point that support will end? Maybe this future date is sooner than we expect?

On a side note.. kind of… BlackBerry will also be licensing out their physical keyboard. I saw this photo in one of the channels I follow… it was captioned ‘makes sense?’

Maybe this is just some mock up or bad photoshop job but nonetheless this could be the future of the BlackBerry pkb on other devices. Basically, the gorgeous pkb that is BlackBerry on ugly handsets. Let’s hope not.

This entry was posted in This and That and tagged bb10, blackberry, future, handets, licensing.

The Future of BlackBerry Devices | Inside BlackBerry

It’s all very promising and of course right after i wrote my post on 10.3.3 this article (https://www.wired.com/2016/10/blackberrys-not-going-disappear/) from wired has Pini talking about potential licensing of BB10 to others.. go figure.

via The Future of BlackBerry Devices | Inside BlackBerry

This entry was posted in This and That and tagged blackberry, blackberry 10, bright, devices, future, outsource, technology.

I know I can’t be the only one that has noticed how future earth is depicted pretty consistently in movies or tv (or books for that matter). Gloom, doom, cold, dark, cold hearted. It definitely doesn’t look like a place I would want to live in. I feel for future generations. During this holiday season I decided to bingewatch #the100 and the first thing I thought was how I could and would not want to live in that ark. Seriously what a dark environment.. and being floated, how terrible? Then I one upped that by going to watch the latest installment of the #hungergames. I don’t think I am understanding the meaning of christmas ! Anyway oddly enough while watching #the100 I couldn’t help but think about the finality of death. Admittedly I got anxiety attacks to the point where my wife told me to stop watching the show. I just can’t fathom not being around for my family. I’m not sure if this can be classified as a mid life crisis. I don’t know. All I know is that new years day a friend and colleague passed away at a young age of 47; so young. I can’t help but think about my anxieties and whether somehow they were some premonition to this. #RIPSteven

This entry was posted in This and That and tagged doom, earth, future, gloom.

I wonder what this “exciting” phone will be??? Honestly, there is just no winning!! lol.. We are a blackberry family and so i got my son the Z10 when it came out.. and it’s been over a month and he’s loving it. Maybe too much.. He’s constantly on it. Prior to the Z10 he had a 9900.. and admittedly not really a gaming phone… and now.. forget about it.. he’s constantly youtubing or gaming.. as good as i have gotten typing on the Z10, I, myself am a keyboard fan so i am holding out for the Q10.. but what might this “exciting” phone be??? a slider? a more powerful superphone? It’s just never ending!! One cannot keep up with the ever changing mobile landscape!! but as a blackberry believer i can only be excited for the future of blackberry (formerly known as RIM ;o))

This entry was posted in This and That and tagged bb10, blackberry, future, mobile, phones, Q10, Z10.